This gene encodes a member of the nuclear receptor superfamily, and is a key regulator of xenobiotic and endobiotic metabolism. The protein binds to DNA as a monomer or a heterodimer with the retinoid X receptor and regulates the transcription of target genes involved in drug metabolism and bilirubin clearance, such as cytochrome P450 family members. Unlike most nuclear receptors, this transcriptional regulator is constitutively active in the absence of ligand but is regulated by both agonists and inverse agonists. Ligand binding results in translocation of this protein to the nucleus, where it activates or represses target gene transcription. These ligands include bilirubin, a variety of foreign compounds, steroid hormones, and prescription drugs. Multiple transcript variants encoding different isoforms have been found for this gene.

There are 62 articles specifically referring to this gene in PubMed. Functionally, the gene has been tested for association to a disease (Zellweger syndrome), proposed to participate in a pathway (Mechanism of Acetaminophen Activity and Toxicity) and a process (regulation of transcription, DNA-dependent). Proteins are expected to have molecular functions (metal ion binding, sequence-specific DNA binding, transcription factor activity, zinc ion binding) and to localize in various compartments (cytoplasm, mitochondrion, nucleus). Putative protein interactors have been described (CHD9, MAP4, MED1, NCOA1, NR0B2, POU1F1, PPARGC1A, RXRA).

The principle application of this assay product is in the screening of test samples to quantify functional activities, either agonist or antagonist, that they may exert against the constitutive androstane receptor. This kit product is an all-inclusive assay system that includes, in addition to CAR Reporter Cells, two optimized media for use during cell culture and (optionally) in diluting the test samples, a reference agonist, Luciferase Detection Reagent, a cell culture-ready assay plate, and a detailed protocol.

The gene contains 18 distinct introns (17 gt-ag, 1 other). Transcription produces 31 alternatively spliced mRNAs. There are 3 non overlapping alternative last exons and 2 validated alternative polyadenylation sites (see the diagram). The mRNAs appear to differ by truncation of the 3' end, presence or absence of 6 cassette exons, overlapping exons with different boundaries, splicing versus retention of 11 introns. 1079 bp of this gene are antisense to spliced gene TOMM40L, raising the possibility of regulated alternate expression. 2 variants were isolated in vivo, despite the fact that they are predicted targets of nonsense mediated mRNA decay (NMD). 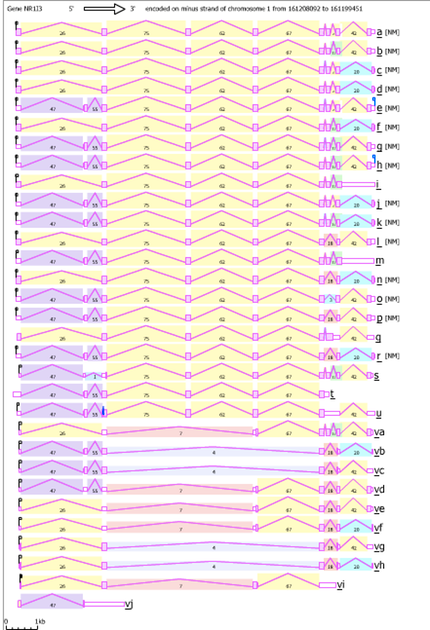