This gene encodes retinoic acid receptor beta, a member of the thyroid-steroid hormone receptor superfamily of nuclear transcriptional regulators. This receptor localizes to the cytoplasm and to subnuclear compartments. It binds retinoic acid, the biologically active form of vitamin A which mediates cellular signalling in embryonic morphogenesis, cell growth and differentiation. It is thought that this protein limits growth of many cell types by regulating gene expression. The gene was first identified in a hepatocellular carcinoma where it flanks a hepatitis B virus integration site. The gene expresses at least two transcript variants; one additional transcript has been described, but its full length nature has not been determined. 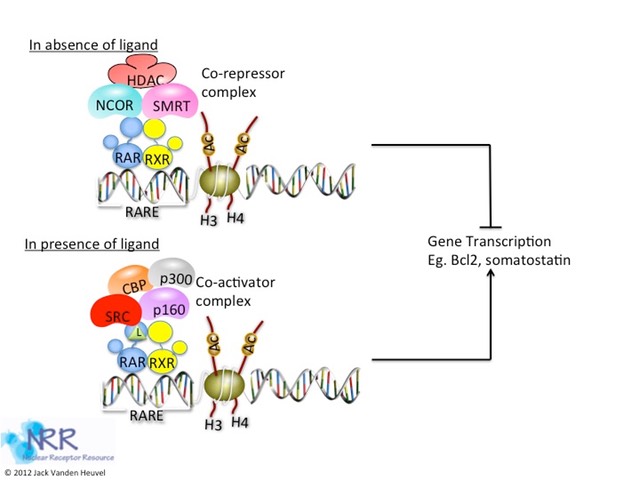 The principle application of this assay product is in the screening of test samples to quantify functional activities, either agonist or antagonist, that they may exert against the human retinoic acid receptor. This kit product is an all-inclusive assay system that includes, in addition to RARβ Reporter Cells, two optimized media for use during cell culture and (optionally) in diluting the test samples, a reference agonist, Luciferase Detection Reagent, a cell culture-ready assay plate, and a detailed protocol.

The gene contains 14 distinct gt-ag introns. Transcription produces 9 different mRNAs, 8 alternatively spliced variants and 1 unspliced form. There are 3 probable alternative promotors, 2 non overlapping alternative last exons and 4 validated alternative polyadenylation sites (see the diagram). The mRNAs appear to differ by truncation of the 3' end, presence or absence of 4 cassette exons, overlapping exons with different boundaries. Note that mRNA .fAug10 was found in vivo, although it is a predicted target of nonsense mediated mRNA decay (NMD). Efficacy of translation may be reduced by the presence of a shorter translated product (uORF) initiating at an AUG upstream of the main open reading frame 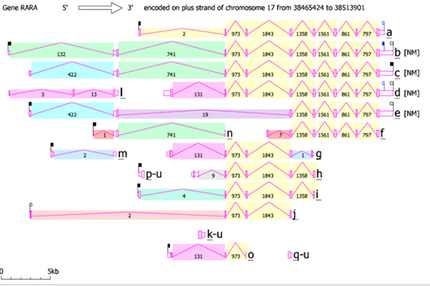